I participated in the Bead Journal Projects 2011 year.  Or at least I intended to.  I made it to about March or April, behind by only a little bit, and life happened.  If you're not familiar with the Bead Journal Project, you create a bead embroidery piece, one per month, over the course of a year.  But of course, life had other plans, and despite my best intentions, I didn't complete the project.  Not that I wasn't busy - I followed favourite rock band around North America for a month. I got a new job. I got another new job.  I went on another vacation.  And, if you judge by my pathetic attempts at blogging last year, 2012 wasn't much better.  The newest new job involves a lot of travel, and a lot of time away from home, and therefore beading.  But 2013 is another new year, and I thought I'd try and finish up the 2011 series. 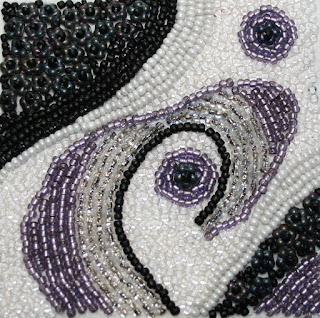 I don't know if I really had an intention for the fourth series.  The second and third pieces just materialized.  This one was harder.  I will tend to monochromatic pieces if not driven in another direction.  I'd also picked this one up after over a year absence.  It was hard.  In beading it, it felt a lot like I was starting over.  I guess in many ways I have.
Posted by Karin at 11:01 PM

Pretty, I like the texture you created as well as the design. CJ in OK