I managed to escape for a little bit this weekend - and head out to the mountains. A bunch of friends and I went skiing on Saturday, which was fantastic. I love spring skiing - the snow is generally pretty good, and softens any falls. Spring also turns the ski hill into a bit of party, as everyone tries to catch a few rays as well as a few runs.

I also discovered a new favorite drink on the weekend - the restaurant called it a "Portini", and the drink combined chocolate liquer with Port in the martini. It was fantastic. Of course, none of the martinis that we had that night were terrible :).

Cheers,
Posted by Karin at 6:46 AM No comments: 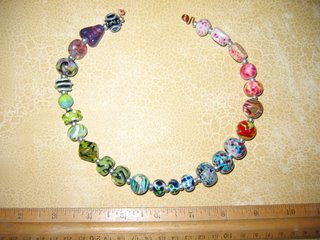 I thought I'd give ebay a shot with the following - a mixed lot of 25 beads. I have quite a stash, and I'm hoping that someone will find use for them..... Link is here.
Posted by Karin at 9:02 PM 2 comments:

Adventures of a beader

I haven't been at the torch much this week - I've signed up for a couple of dance classes and a few other things, so I haven't torched as much as I would like. I also stopped at the bookstore the other night and picked up a new Spanish CD - and I'm currently driving myself crazy with it.....

I did get asked if I sell jewellery by a friend - it was quite a nice compliment! We'd gone out for lunch, and she said she loved the necklace I had on, and wondered if I'd make her mom something similar - it was terribly nice of her to say :).
Posted by Karin at 8:05 PM 1 comment: