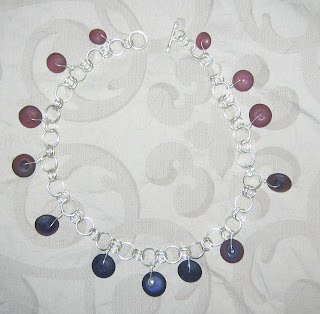 I've been so busy in the last couple of weeks that I forgot I was supposed to hand something in this week for my jewellery class. And so I spent most of the weekend working on a necklace - the beads are all actually a matte dark purple, and not the black that most of them look like in the picture. I made the rings, soldered the whole thing together and then created the clasp. I'm not sure I'll ever do another necklace again, but making the rings and clasp is something that I'm glad I have in my list of skills.
Posted by Karin at 6:30 AM 8 comments:

The week that was

Thanks for all of the comments on Alhambra - I'm pleased with the progress, and can't wait until it looks all sparkly!

Riverdance was fantastic! I've seen it several times before, and love it each time I go. It's really too bad that the show will close after it tours North America on one last go round. I couldn't believe the people around us though - the woman beside me kept screaming at the child behind her for kicking the seat. I think if you're going to complain about people kicking seats, you should at least wait until the end of the number so that you don't disturb everyone else with your talking. And the woman behind me, who was the the seat-kicking child's mother, was just as bad. For her, the end of each number needed to be accompanied by her yelling "Yeah, Baby!". Each set of neighbours was equally as charming.....

I've spent most of the week away on a business trip, which has meant no stitching time. On the plus side, I was on an airline that offered satellite TV on route, and was able to catch both Coronation Street on the way out and American Idol on the way back!

It was a busy business trip, but I was able to catch dinner with a friend two of the nights. We were really good friends when she lived here, but haven't seen much of each other since she moved out of town. It was fantastic to see her again and to reconnect, and it meant that I was entertained well when I was out of town.

I'm going to be busy this weekend, having fallen fairly far behind in my jewelery class. I managed to be fairly uninspired for a couple of weeks, and haven't been up to the jewelery studio to do any homework, which means that the project which is due this week isn't done yet..... at least there's a weekend in between here and the weekend.
Posted by Karin at 5:45 PM 2 comments:

And here we are! The cross stitch is done 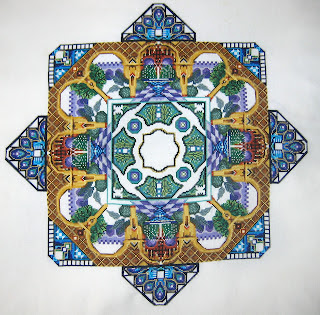 I finished the last little bit of cross stitch this morning - on to the beading and specialty stitches!

I'm off to see Riverdance this afternoon, and then out on a business trip tomorrow, so I'm not sure how much I'll get done this week. It would be really nice to crack open the little watchmaker cases of beads that the kit from European Cross Stitch came with though....
Posted by Karin at 11:07 AM 15 comments: 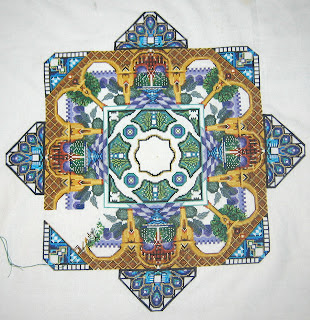 I'm *this* close to finishing the cross stitching on Alhambra - I'm hoping it's going to be sometime later this week that I finish, and can move on to the specialty stitches. The areas that I have left are more confetti than some of the other parts, and so it might take a bit more time than I think it will. I'm off on a business trip next week, so I'm hoping to take a small project with me, and it will likely be either the PIF I'm supposed to be working on or an ornament. I can't remember if I'm allowed scissors or a needle not on the airplane anymore, but I guess I'll have to check before next week.

I showed no self-restraint this week, and ordered supplies and fabric for both Egyptian Garden and St. Petersburg, both by Chatelaine. I suspect that St. Petersburg will replace the Mirabillia that I included in my goals this year, but we'll see.....

Thanks for the comments on the ring - I'm still in my beginner jewellery class at the art college, and we learned how to create a band ring and set a stone on to it last semester. I hadn't quite finished this ring at the end of the last semester, and I finally finished it a week or so ago.
Posted by Karin at 7:27 PM 16 comments: 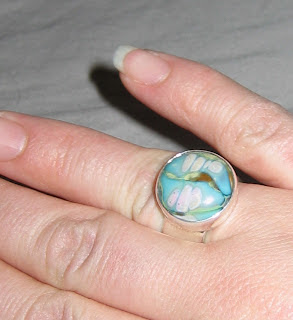 I'd been working on this ring since before Christmas, and I finally finished it up last week. The stone is a puddle of melted glass, which started out life as a bead, and ended up in the ring. I like the wide band on the ring - it really gives the ring some weight.
Posted by Karin at 7:00 AM 12 comments: 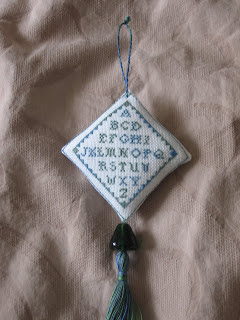 I was a bit worried, as this Pay-It-Forward had taken longer than the other one I mailed on the same day. But Carol emailed today to let me know that it had finally arrived. The pattern is from Historic Stitches, and was stitched in Vicky Clayton's "Deep Ocean" silk. The glass bead above the tassle is one of mine - I like how the cone shaped beads sit above the tassles and finish them off. 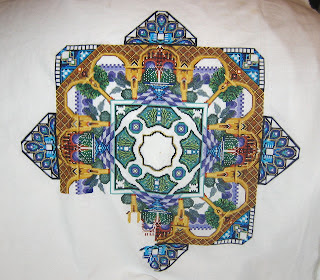 I managed to make a little progress on both Alhambra and Pyra before the end of the month. I'm almost to the point on Pyra where I will start decreasing to form the bottom of the beaded bag. Here are the updates.
Posted by Karin at 7:03 AM 8 comments: