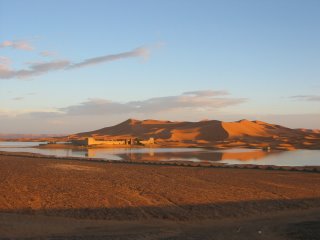 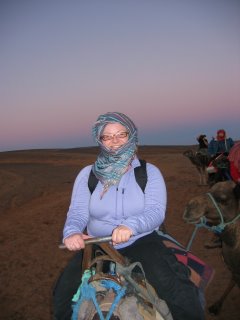 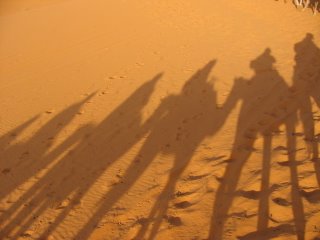 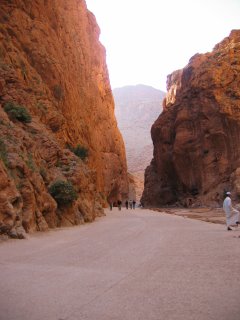 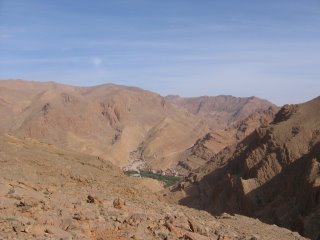 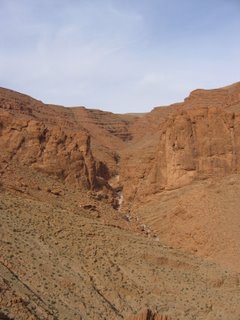 Morocco - days 5 through 8 - The next part of the trip saw our group head into the desert after visiting the Imperial Cities in the north. (The complete itinerary for the trip is here if you're interested).

We left Fes and spent the next two days travelling to our Saharan campout. Our travels took us to the northern half of Morocco only, but we still had some serious ground to cover between locations. At the end of the two days, we were greeted with a spectacular Saharan sunset, as well as our travelling companions for the next two days - our camels!

For Christine and Shalini, that is me on the camel! I don't have many pictures of my self, as I don't really like being photographed, but that one came out not too badly. Our camel guides provided the desert headwear from scarves that we had purchased in Fes. To set the record straight - camel riding is not as glamourous as it sounds. Most of us discovered that we're not practiced in camel riding, and came home with a number of new aches and pains. That being said, I'm proud to say that I rode a camel in the Sahara.

After our camel riding adventure, we were off to climb the Todra Gorge. We spent the better part of a day driving to the gorge, and had a whole day to complete the climb. The climb took about 4 1/2 hours, and provided some spectacular scenery. No wonder that the rock climbing scene from Mission Impossible II was filmed here. You can see where it was filmed on the right side of the last photograph. (If you've seen the movie, Tom Cruise opens the movie by rock climbing).
Posted by Karin at 7:04 AM 4 comments:

The first load of laundry is in the washer, and I need to make a grocery store and post office run shortly, but I thought I'd try and make another post before doing so. This and the preceeding post will be posted in a short time frame, so if you've not read the post before this, have a look at that post too.

The first couple of days of the tour were full of sightseeing! We tracked along the imperial cities in the north, heading out on the train from Casablanca to Rabat. The train system is fairly well developed in Morocco, and most of the trains were on time.

Morocco shows influences from just about everywhere in Europe - the French, Spanish and Portuguese and Romans were all in Morocco, and there is definitley a strong Islamic influence in place as well. Rabat definitley shows the Portuguese influence well, with whitewashed walls and blue doors. 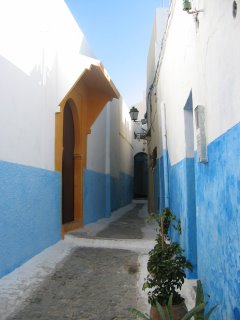 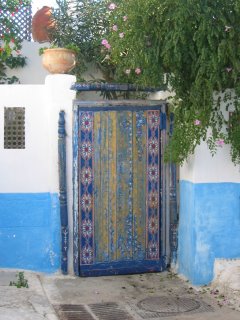 We only had part of the afternoon in Rabat before boarding another train and heading on to Meknes to stay the night. The next morning, we went out sightseeing. Meknes is home to a huge grainery which used to store grain for horses. Apparently 12,000 horses were fed from the grain stored in the vaults here, and it's no wonder considering the size of the place. I caught a taxi up to the graineries with the girl I was rooming with, and I was glad that there was someone else there, as we were the only two people in the place! If this place looks familiar, it was used as part of the set for the "Last Temptation of Christ".

Lunch in Meknes was camel burger! Our tour guide helped us buy camel meat from a butcher in the market, and had it ground up with spices. She then took us to a very small restaurant nearby where they shaped the meat into small balls and grilled them for us. The meat was put into a pita-like pocket for consmption later. Lunch, of course, came with a glass of mint tea. 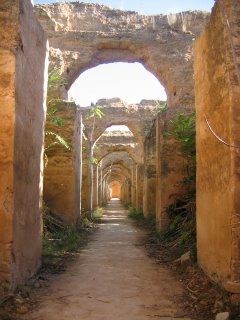 After lunch, we boarded a mini-bus to take the group to Volubulous, a Roman ruin between Meknes and Fes. We had a private tour of the place, which was largely deserted when we were there. The joys of travelling in off season! 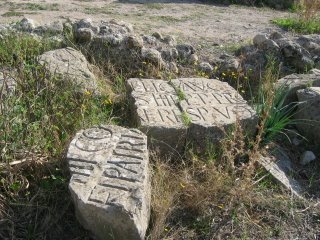 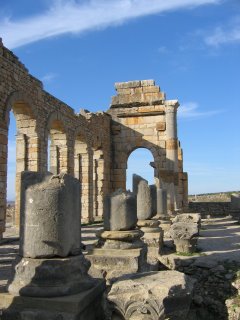 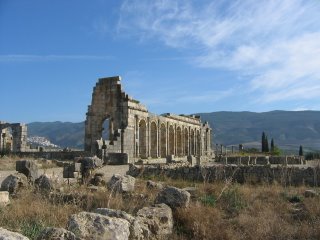 The bus then took us on to Fes. Fes is largely regarded as the cultural capital of Morocco, and they are proud of the cusine and local attractions there. Our group split into smaller groups in order to take advantage of a few local guides. Our guide took us to view the city of Fes, and to the mosaic factory and tannery located inside the city. If the tannery looks familiar, it's been shown on "The Amazing Race" before. 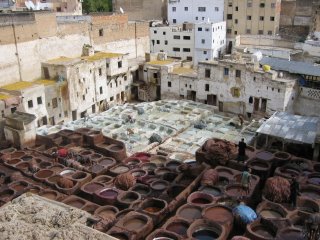 Our dinner that night was a Moroccan feast set in a riad. Riads are traditional accomodation which features rooms set around a central courtyard. This riad had been beautifully done up, and we all had an excellent meal there.

Typical Moroccan cuisine features tagine, cooked in a dish of the same name. It usually is meat accompanied by some vegitables and cooked in a small amount of liquid to make a stew-like consistency. Typical combinations include preserved lemons and chicken, meatballs and tomatoes, and beef and prunes. Its traditionally eaten using bread as a scoop, but fortunatley most restaurants also provide forks. Other dishes include brochettes, which are meat skewers, and couscous, which is a the name of a small grain, similar to polenta, as well as the name of a dish. The dish version of couscous has the grain plus vegitables and meat.
Posted by Karin at 9:51 AM 4 comments:

It took me 24 hours to navigate from Casablanca to Calgary, with 3 plane flights and a couple of short stopovers. I got home last night at 2am and was exhausted, but it's now 6 am and I'm wide awake. I've still got that dead tired headache and I'd love a couple hours sleep.

At any rate I thought I'd share a couple of photos of the trip. I started in Casablanca with a couple of days on my own. The tour left pretty much straight away, so I wanted a couple of days to tour Casablanca and do a few things before the tour left. There wasn't all that much to see in Casa, but I managed to get a few mint teas in before leaving the city.

Mint tea is a glorious beverage in Morocco - it's fresh mint leaves with a good shot of green tea and about as much sugar as can be saturated by a tiny cup of water. It's presented in high style - most of the time the tea is poured out of a teapot into a tiny glass cup from a great height. Pouring the tea this way perfumes the room with mint, and the whole thing is lovely to drink.

Casablanca shows lots of evidence of French architecture, even if it is from a different era. One of the photos below is of a hotel that is now in ruins, but the hotel is so iconic that it made the picture list anyways. 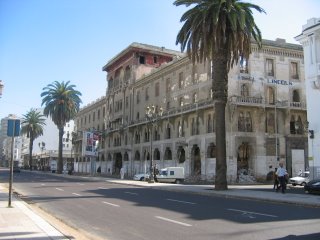 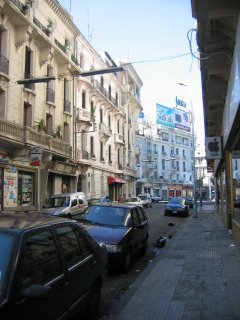 The first official day of the tour featured the Hassan II Mosque in Casablanca. It's huge. Not just a little big, but huge as in could house St. Pauls or Notre Dame huge. And the grounds are enormous. It's also gorgeous and very modern at the same time. The floors are heated, the roof retracts and the doors are hydraulic. It's a real marvel.

One of the amazing things about being on this trip was that there were only 12 of us, we could basically do what we liked a lot of the time and it was off-season in Morocco, and thus there weren't a lot of people at many of the sites we went to. This means that there aren't a lot of people in my photos. I don't really like people in photos, but in some places I've visited there are too many people to try and get them all out of the shot. We arrived early here - about an hour before the first tour, and basically there were only the 12 of us on the grounds that morning, and we got to take an hour of photos before any of the other tour groups showed up. 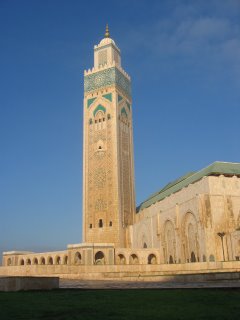 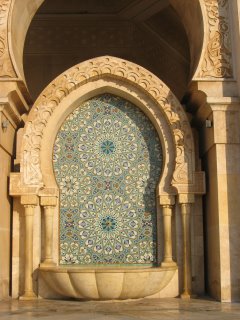 I leave Marrakesh tommorrow to head home. I will miss a lot of things here, but am glad to be on the way home.

I love the fresh mint tea, and the ability to read my book in a cafe. I will miss hearing the call to prayer. I will miss the colours of the souks, with all of the pottery, leather and spices in them.

I have enjoyed the trip, but can't wait to be home again.
Posted by Karin at 7:22 AM 2 comments:

I finally worked out how to change the keyboard back to an English one! It's amazing what having a few of the characters out of place can do to you. I'm still on holidays and loving every minute of it.

Today we tried a traditional moroccan hammam, which is a type of spa. The treatment was fantastic, and we all are feeling much better (and much cleaner) for having gone to the hammam.

We're on the coast, which is lovely. It's full of fresh fish and seafood, which is a welcome break from the traditional food that we've been having for the last week. I forget how much I miss living in a cosmopolitan city with so many dining options until I leave and my dining options are much more limited. That being said, the food here is wonderful and I'll try and cook some of it when I get home.
Posted by Karin at 9:18 AM 2 comments:

I think I have the keyboard thing mostly worked out - it's quite slow to type as some of the characters have moved. (and I only just figured out the appostrophe)

It's been an interesting one - the hotel only gets the Real Madrid channel in English and I'm trying to type on a non-english keyboard. More later....
Posted by Karin at 3:47 AM 2 comments:

It's been a week since my major volunteer project was completed, and my schedule is still going strong - Saturday was mostly running around, and a hockey game afterwards. The Flames didn't win, but it was still nice to catch up with friends.

Sunday I went to meet the other bead making enthusiasts in town, and then had my parents over for dinner. I've got a wedding to go to this weekend, and am leaving soon to go on vacation, so I wanted to catch up with them before I left.

The exciting stuff that happened this week - I bought a new western shirt (which always makes me happy) and work is going smoothly, which always helps.
Posted by Karin at 10:46 PM No comments: