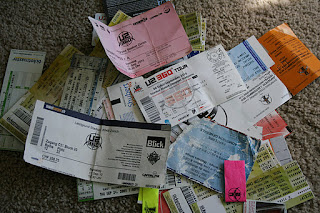 I had one of the best summer's ever - a lot of good friends, many good beverages, and a lot of U2 concerts. Over the course of the summer, the pile of tickets, wristbands and goodies really added up! I've been a fan of the band for a while, but it wasn't until I went to Vancouver two years ago that I discovered what was really possible in getting to see the band. The last concert of the tour was in Moncton at the end of July, and it was a great time. It was sad to see all of the people I'd hung out with for a couple of years depart for the last time. All of the other times we'd said goodbye, I'd always been able to say that I'd see them in the next town, or in a few weeks. This time, it really was goodbye for a good long while. As sad as all of that was, I am so greatful that I was able to do it, and it felt like a new part of my life had begun.

So to celebrate, the August BJP is a butterfly, in bright beautiful colours. I love the fact that the colours remind me a lot of those used in a lot of native beadwork, as to me, there was a really spiritual element to the summer. I am enjoying doing the BJP again - it's nice to get a chance to stitch and just bead, without having to think a lot. 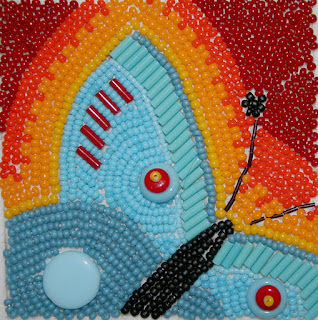