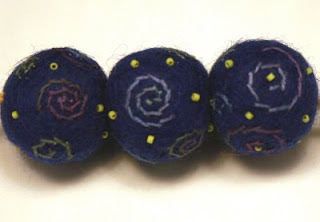 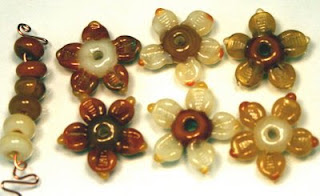 I have new beads this week - felt beads with fun stitching on them, plus lampwork flowers. The felt beads are commercial - I've ordered supplies to make my own, but I purchased some base beads this weekend as a kind of a tide-me-over until I get the supplies to make my own. The stitching is done with Vikki Clayton's "Midnight Rainbow" - one of my favourite colours!
Posted by Karin at 5:20 PM 10 comments:

Button, button.... who's got the button 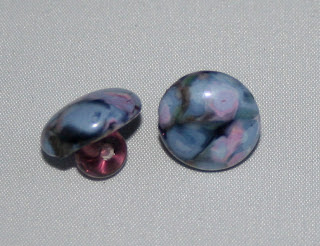 I've wanted to do something with a couple of broken beads for a while - the beads broke in half, so I melted them down into circles, and then added a small bead on the back - and - presto! Glass buttons!
Posted by Karin at 5:32 PM 2 comments:

I was tagged by Kirsten, who I'm glad to see is back posting, as she's one of the most true to life writers out there. Kirsten was tagged by Patti, who's blog I also enjoy reading.

Where were you 10 years ago? I was either in Europe, or just about preparing to go. It was World Cup - France 1998, and as a North American, I had no idea that this whole soccer/football thing consumed as many people with as much passion as it did. It was a lot of fun - we'd go to bars at night and watch the football game, and try and talk with the locals. It was a birthday trip, as I celebrated my birthday in a Parisian bistro while drinking Cuban rum and watching the football game.

Five things on your to do list for today.
(1) Finish Spanish homework (sort of complete)
(2) Go to Spanish class (Done)
(3) Make a sandwich for lunch and soup for tomorrow's lunch (Done)
(4) Attempt to appease the cat. Since there is now no second cat in the house, the first cat has decided that the human's only job is to entertain her, and tries to foil my attempt to do anything but. When there was a second cat, the entertainment job was at least split between the other cat and myself, so it wasn't quite as much grief (Done, although not nearly as well as the cat would like)
(5) Mail package (Done)

Snack foods I like.
Cupcakes.
Peanut Butter.
Ice Cream.
If I'm being good, healthy snacks are snap peas and strawberries

If I were a billionaire.
If I had enough money, I'd get a nice flat in New York, and invite all of my friends to stay. And then figure out what good I could do with the rest of the money.

People I want to know more about
Glenda , who has one of the most interesting jobs I can think of
Monique, who's got a drool worthy shop on Etsy
Christine who doesn't live all that far away and who I hope to meet someday
Dani who has done some inspiring photography lately
Sara - I love the title of her blog, and hope to hear more from her
Posted by Karin at 5:42 PM 2 comments:

There and back again

I *think* I've finished the marathon of travel that's pretty much eaten up my life for 3 months, and it's lovely! I love being home as much as I love traveling. Of course, I can't complain about the travel - this last trip was to New York - one of my favourite places. And I finally got to the Cloisters and got to see Wicked - both were just as amazing as I'd hoped they'd be.
Posted by Karin at 7:58 PM 6 comments:

I've been traveling a lot lately - mostly for work, but occasionally a fun trip as well. Because it's been mostly for work, I've been flying by myself a lot lately. I'm the kind of person who likes to settle into their seat, pop in my earphones and open a good book, and hope that the distractions make the journey go a lot faster. I've been constantly amazed by the people who want to chat during the flight - event when it's clearly not wanted or welcome. I mean - if the person you're trying to talk to is not responding, especially if they have earphones on, don't you get the message pretty quickly that they don't want to chat? Or if they appear more interested in the book in front of you than in the conversation, isn't that time to give up?

I'm not sure what the reason behind this recent phenomenon is - flights now have 24 channels of TV or several options of entertainment. What ever the cause, I'm hoping that the next flight, I'll just be left in peace.
Posted by Karin at 6:28 AM 2 comments: 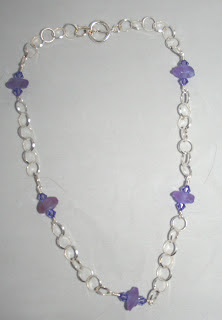 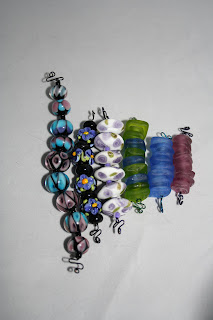 Beyond the piece that I completed for the door prize last week, I also beaded and finished a new necklace. Its been busy in my life at the moment, and sometimes even I dont know where all of the weeks go....
Posted by Karin at 9:34 PM 4 comments: