We have another 4 to 5 inches of snow this weekend... I haven't gone out to find out exactly how deep yet. (Fortunately, my fantastic neighbours shoveled the snow again from around the house, so I may not have to venture out today)

We had 6" of snow last weekend. I'm beyond tired of fluffy white cold stuff. I'm officially ready for spring to start.
Posted by Karin at 12:21 PM 3 comments: 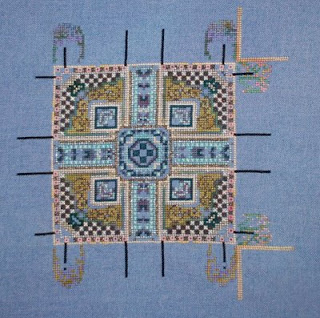 I wanted a white/cream bracelet to incorporate the vintage buttons, but I didn't want it to look too much like a bridal bracelet. I then found the green, which solved all of that. It's about 3/4 finished, as I started working from the centre out and now need to finish the ends and add a clasp.
Posted by Karin at 10:00 PM 1 comment: 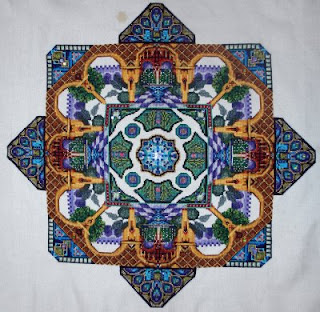 We ended up with a lot of snow today - about 15cm (6 inches) so I took full advantage of the snow and stitched most of the day. With so much stitching time, I managed to finish Alhambra Garden!!
Posted by Karin at 10:35 PM 19 comments: 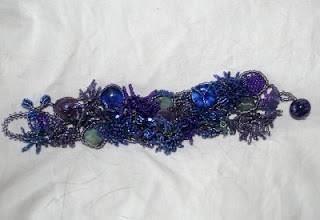 Here is the first freeform bracelet - blues and purples...
Posted by Karin at 6:35 PM 9 comments:

And somehow I seem to lack the motivation to finish any of them.
Posted by Karin at 8:10 PM 3 comments:

But it's not quite warm enough to be really warm yet - it's supposed to be quite nice for the rest of the week though.

I've been working out quite a bit lately - the last time I stepped on the scale it was quite a shock, and so I haven't got much stitching or beading done lately. I have been picking away at the white/green bracelet, which is turning out well. Alhambra is still "in progress". I can't quite figure out why I procrastinate more when I get closer to finishing a project, but it always seems to be the way. I also ordered materials for "Cirque des Circles" from Ink Circles, including Dinky-Dyes thread to stitch it with, and I'm hoping that shows up in my mailbox any day now.
Posted by Karin at 7:12 AM 2 comments:

Will spring ever arrive?

I'm sure all of the snow will be gone by tomorrow, but it's depressing to see white stuff falling to the ground.
Posted by Karin at 10:36 PM 2 comments:

It's been too long

I can't believe it's been this long since my last post - and I have things to share, I just can't get pictures up. My laptop crashed in February, and although I was able to recover everything, I can't get back on to the internet with the laptop, and of course the only computer that connects to my camera is the laptop. It's terribly frustrating, but I'm hoping to get a new laptop and consolidate the laptop and desktop on to one computer.

I took a "freeform" beading class a few weeks ago, and finished a bracelet that I'm rather pleased with. I think it looks like undersea coral - lots of little branches of purples and blues, with some lampwork glass and crystals. Of course, that's my opinion now that I'm done with it, as there were plenty of moments that I *hated* the thing on the way to getting it finished. After I finished, I decided I was back to liking it, and liked it so much that I started a second bracelet, which will be white/cream with lots of vintage buttons and some spring green accents. I'm in the middle of the bracelet at the moment, which means I alternate between loving and hating it. I'm sure everything will work out, but there sure are tons of moments of self-doubt in the middle of a free form project.

In addition to that, I'm *almost* done beading Alhambra. It's now very sparkly, and the small packets of beads that I've had for far too long are getting smaller and smaller, which is encouraging. I hope to be done with Alhambra sometime this week, but again, no pictures until I can get the computer thing sorted out.
Posted by Karin at 11:36 AM 4 comments: