I promised myself I'd post more, but today I don't have much to add.

I do totally appreciate all of the comments that everyone has left. Somedays, that's enough to keep me going
Posted by Karin at 8:57 PM No comments: Here's July's Bead Journal Project - inspired by a viewing of "Wicked" in New York, and a reference to my favourite (live) U2 song "City Of Blinding Lights". It's plenty sparkly, and totally random...
Posted by Karin at 7:33 PM 7 comments: 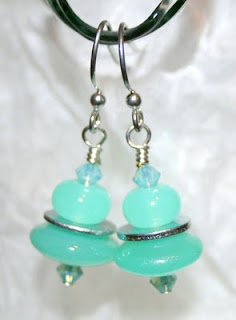 One of the reasons I like beads, and making jewelry, is that I can get a quick sense of accomplishment. I love cross-stitching, but even the smallest piece is probably 4 or 5 hours of stitching to finsh, where a pair of earings is 20 minutes or so to finish? These are handmade beads, in a glass colour called Kryptonite, strung up to simple earings.
Posted by Karin at 9:05 PM 4 comments: 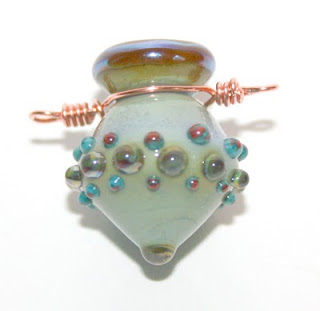 This is the second little vessle I've made, and although there's still a long way to go, I can definitley see progress.
Posted by Karin at 8:45 PM 6 comments: 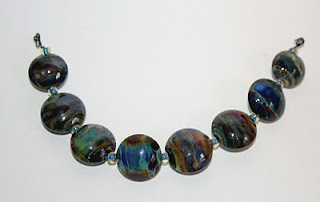 I'm so in love with this new set - it's really amazing what this glass did all on its own. Usually with striking glasses, you need to do special techniques (and hope the glass co-operates). With this glass, it was so easy, and I love the results.
Posted by Karin at 7:07 AM 3 comments: 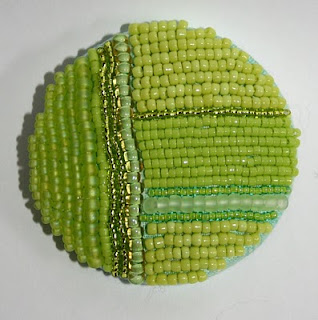 Here's the June bead journal project (yes, I am behind). June was a month that I had planned out carefully for months, until one day, everything was set at a right angle. I follow a band, and I'd purchased concert tickets months in advance. I'd carefully watched airfares to make sure I was getting the lowest fare, booked hotels, and made all other arrangements, until one day the band postponed their 2010 ticket until 2011. I knew it wasn't anyone's fault, but it still wasn't my favourite, and required a lot of re-arranging. It looks like all will work out, but it was a crazy, topsy turvy month.

I am following a colour wheel for the 2010 BJP - if you want to see the progression, all of the finished works are at the side of my blog.
Posted by Karin at 11:11 AM 10 comments: 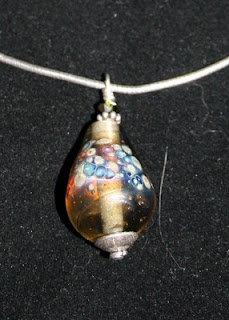 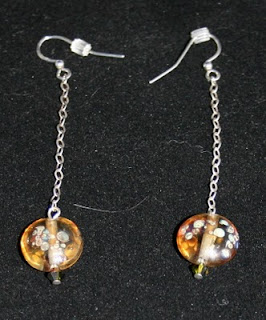 I have a new earing/pendant set - my photography skills still aren't the best, so in the interests of posting something that's actually in focus (and getting something up on the blog more than once a month), I have photos of each separatley.
Posted by Karin at 7:27 AM No comments: 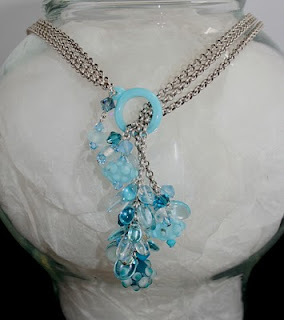 It feels like forever since I've posted. It seems like a lot happened, but then again, maybe not a lot of it was noteworthy. I designed this necklace for a charity function in the next few months, and figured I would share here as well.
Posted by Karin at 3:36 PM 4 comments: