The end of summer

I played ball twice this week - it's now "playoffs" and they're attempting to squeeze a couple more games in before the end of the season. Games this week started a half hour earlier than normal - which means an extra busy evening as I rush home, grab clothes and a mit, scarf something down for supper and head back out to fight traffic. They're a half hour earlier than normal because the sun is going down earlier. It's definitley the end of summer, and what passes for fall here is right around the corner.

Summer in Canada is a funny thing - the nights are really light, which makes it perfect for something like ball, as you can play a full game, and then head out for some beverages. If you're really lucky, you might even get to sit on a patio.

However, there are nights like last night. It's August. It's also 6 degrees celcius and spitting rain. There might be a thunder cloud in the distance somewhere. But apparently it's still ball weather. So we play on. And when we're done, we end up going to 3 different pubs before finding somewhere that we can all sit. Apparently everyone with some sense in them has spent the last 2 hours inside, enjoying their beverage, instead of in a wet field, catching balls (and probably a cold).

Welcome to summer in Canada.
Posted by Karin at 8:30 PM 1 comment:

To answer a couple of questions

I got a couple of questions on my comments last post, and I thought I take a crack at answering some of them.

First - what would I do with a focal like this? I've generally seen them made up into pendants - the size of the bead doesn't really lend itself to smaller things. A lot of people also just collect beads, without really having any intention of doing anything with them.

Second - making focals this size. I have to say that I probably wouldn't have made the focal this size if it wasn't for the class. It's tough to get that much glass to stay warm and to keep it's shape. The studio that I usually use also only keeps the kiln on during classes. The process of slow cooling a bead is called annealing, and it involves heating a kiln up, and then letting the beads and the kiln slowly cool. If you cool a bead too quickly, it breaks. Without being able to put beads directly into a hot kiln, the larger focals would break. There are a couple of other ways of cooling smaller beads, but the kiln method is best for larger beads.

I've been annoyed all day by small things - the mosquito bites on my arm, people taking elevators a single floor, people riding bikes in the dark without lights. Maybe tomorrow will get better.....
Posted by Karin at 9:27 PM 1 comment: 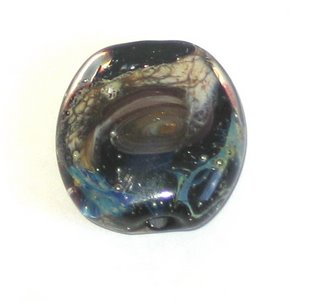 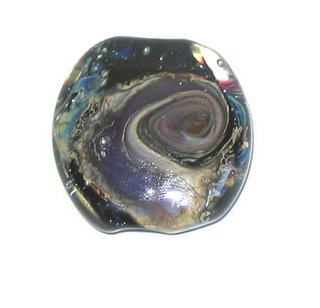 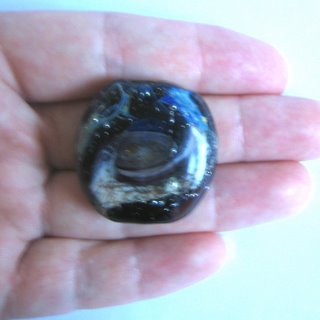 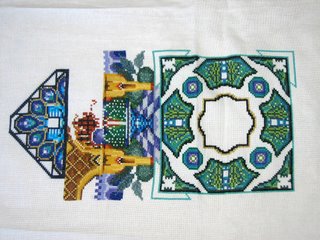 I'm going to be a total thread hog today - there's three pictures of the bead I made in class this weekend, plus one of the most recent progress on Alhambra Garden.

The three pictures of the bead show both sides, plus a size comparison with my hand - this bead is *big*! Honestly, it's probably the largest bead I've ever made. The instructor calls this one "Galaxy" and I can see why. But I think it turned out well. It's always tough with class beads - inevitably don't do something right in the process of making the bead, and it doesn't look just the way it's supposed to - but its all part of the learning process. I would have liked to shape the bead a bit more - it's pretty close to being on centre, but the ends are slightly crooked.

It's been a while since I posted an Alhambra update too - it's definitley coming, if I can only do this much 4 more times, I should be close to being done :).
Posted by Karin at 6:42 PM 6 comments:

The bead class is going well! I feel like I'm learning a lot, and we're making cool beads. The instructor has some really fantastic samples, and overall, I'm pretty happy about the whole thing. My first beads come out of the kiln tomorrow, and we'll see what they look like then. This weekend we're learning something that looks like the bead in the second row of her website, on the far left.

The frustrating thing about classes is that you want to learn lots of technique, but your first try on a bead doesn't always look quite right. It's always kind of frustrating to have someone ask you what your learnt, and only have a handful of mis-shapen wonkies to look at.

I'll post piccies after I get home tomorrow.
Posted by Karin at 9:48 PM No comments:

I'm still finishing the reconciliation from yesterday, and it seems to be going better. It's always a long haul, and I know it's only another couple of weeks before there's more to do.

I'm terribly excited about the weekend - I have a full two day torch class! I haven't even been near glass or a torch for 2 weeks with everything going on, so I'm excited to spend a couple full days doing nothing but watching glass melt. I think there will be some cool things come out of this - the instructor is from the states, and is quite well known, so I'm looking forward to learning some new stuff. I think the outline for the class involves sawing through glass to reveal different layers and playing with different metals within the beads.
Posted by Karin at 11:11 PM 2 comments:

I know I haven't blogged in forever.....

For a long while the blogging muse wasn't there. But I think it's back.

I'm reconciling volunteer stuff tonight. And it's not pretty. Somedays I wonder how hard it is to code *all* of the items on one spreadsheet to one account. Just one. Not two different accounts.

I know Calgary labour is scarce, and accountants are like gold in this city. But at the same time - this isn't hard. Code everything on one spreadsheet to one account, everything on another to somewhere else. I'm going to scream soon.

I'm making good progress on Alhambra - I should have piccies soon.
Posted by Karin at 9:48 PM No comments: 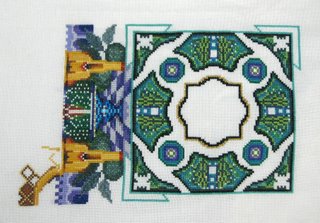 I've been stitching and beading lots lately, and I finally have something to show for it. I finished one whole chart page on Alhambra Garden, and I still like the project!
Posted by Karin at 11:08 AM 11 comments:

The SBQ of the week

For those of you who use hand or over-dyed floss, how do you store it?

I use "Floss-away" bags - the mini-ziplock kind. I have silk overdyed floss on one ring, and cottons on another, sorted by manufacture. It seems to be working so far!
Posted by Karin at 10:13 PM No comments: 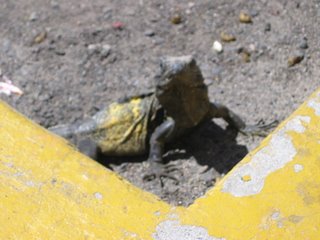 I ran across this picture yesterday when I was sorting through some of my vacation pictures, and thought he'd be a great addition to the blog. The picture was taken in a parking lot in Mexico, when I was on vacation there in March. The little guy obviously had the right idea, as he's a perfect blend of grey and the bright yellow used to paint the meridians.
Posted by Karin at 7:02 PM No comments:

Today is a bank holiday in Canada - and I'm celebrating by doing nothing. Well, actually, I'm stitching and watching Law & Order on DVD, but besides that, I'm doing nothing. I was in a stitching slump earlier in the year, and have almost nothing for Christmas Ornaments! I finished one today, and am starting work on another. (I would post piccies, but they're likely to be used for an exchange, so I'll keep everyone in suspense for a while).
Posted by Karin at 2:07 PM 1 comment:

When did adulthood hit?

It's been a tough week at work - lots of not so good stuff going on. I've fortunatley managed to stay out of most of it, but it hasn't left me in the best mood.

All I want to do is have a nice dinner, a glass of wine, and maybe a treat - ice cream would be nice. Oh - and a chick flick - something not too taxing on the brain.

I get a phone call from some friends tonight - they want me to go to the bar. There's a band playing there that I actually quite like, and considering the week I've had, a little alcohol wouldn't hurt either.

But I'm honestly not in the mood - I'm tired, and the prospect of hanging out with in a loud and smoky bar doesn't really thrill me. And it's always just stupid to get a cab at the end of the night - average wait times on a Friday or Saturday night can be at least a couple of hours because the city is so busy.

It struck me as I was trying to decline the invite to the bar that somewhere in the last few years, I became an adult. The prospect of heading to a bar on a Friday or Saturday night used to thrill me. In university, it didn't even have to be Friday or Saturday - any night there was some thing going on was an excuse to get out and party. But not anymore - I've become a fan of quality over quanitity in alcohol, and the prospect of washing smoke out of my hair at the end of the night isn't thrilling either.

So tonight, I'll relish being an adult.
Posted by Karin at 9:32 PM 3 comments:

I got the bestest thing in the mail yesterday - a wonderful present - the pattern to Gaia! It's so pretty, and I can't wait to start on it. I'm still working on Pyra, and have made a few more rows progress, but it's sometimes slow going. I *love* all of the beads though - they are just gorgeous on their own. I've been beading for years, and I never realized why Delica's were worth it until I saw them worked up, and then it's obvious. The colours are gorgeous, and they just catch the light.

Oh - and kudos to Stephanie for the prezzie!! Thanks again!!
Posted by Karin at 10:54 PM No comments:

I'm constantly in awe of how people manage through life without a clue. I'm taking an aerobic dance class that starts this weekend - it's at a studio that a friend of mine dances at, and its kind of a filler class until my dance classes start in earnest this fall. I really liked the weight I lost this spring and I'd like to keep it up, but time spent on a treadmill/elliptical trainer gets old fast. So I signed up for a dance class.

So I signed up, and I emailed to find out what I should wear - I figured that workout wear was good, but footwear was a bit of a mystery to me. I know some places are picky about footwear, so I thought I'd ask. And all I got back was "that will be fine". Umm...ok.... so *what* exactly is fine - sneakers? barefeet? ballet shoes?